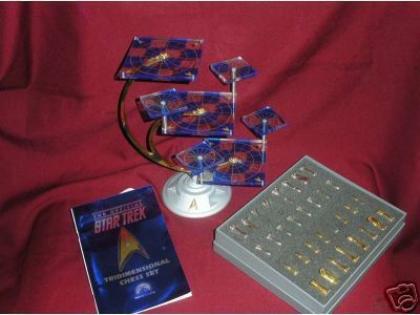 First seen in the classic Star Trek television series, Tri-dimensional Chess (a.k.a. Star Trek Chess) was first detailed in Franz Joseph Schnaubelt's book, the Starfleet Technical Manual, published by Ballantine in 1975. A fan, Andrew Bartmess, got in touch with Mr. Schnaubelt and fully fleshed out the rules. It adds a third dimension to the game making chess more difficult. Vertical movement, as well as the tradition horizontal movement, creates many new moves and strategy.

Reproductions of the original prop were sold by the Franklin Mint for a time.

Roughly, there are three fixed 4x4 boards staggered so that the lower board's last two rows are under the middle board's first two, and likewise the middle board's last two rows are under the top board's first two. Four 2x2 movable attack boards attach to the corners of the fixed boards, above or under, so that the game actually has a total of seven planes (but only 16 of the 96 extra squares are "in existence" at any one time). The attack boards are also necessary as bridges between the fixed boards. Notation of positions and moves (since now there are sometimes several possible paths between any two starting and ending squares) is initially problematic, but well addressed by Mr. Bartmess.

The standard set up is uneven, with the lower (white) board's attack boards starting above instead of under as called for by symmetry. This gives an advantage to white since he can reach the neutral board faster than black as a consequence.