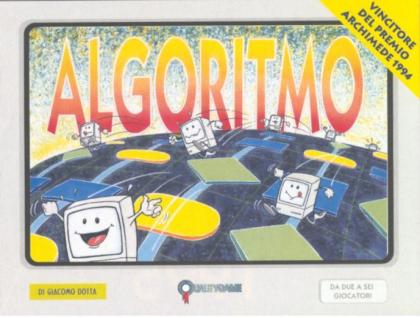 Algoritmo won the first edition of the contest for unpublished games, Premio Archimede, in 1994. Quality Game published it the year after.
Each player has a little plastic computer that runs on the board to get rid of all the "output cards" he got at the beginning. Each player has a little cardboard "console" with three boxes called A, B and C. The player draws three numbers from a special deck. He arrange them on the boxes as he see fit. To move on the board, dice are not used: the little computer can advance of A + B spaces, A - B spaces or, from certain spots, of B x C spaces. Numbers can be changed in certain spaces. When the computer stops on a space with a certain letter, the player can discard the matching "output card" if he has one. When a player lands exactly on the "End" space, the one with less output cards wins.