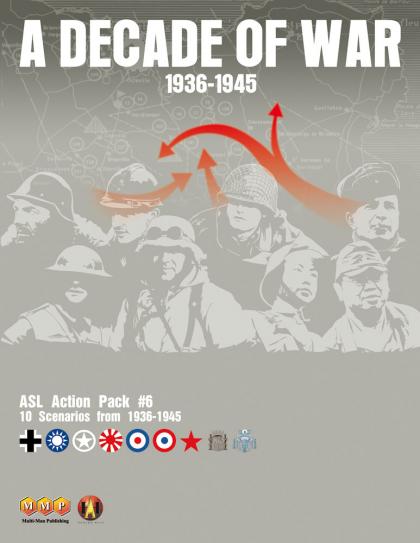 A Decade of War, the sixth "action pack" for Advanced Squad Leader, covers nearly ten years of world-wide conflict, from the 1936 Fascist drive to capture Madrid during the Spanish Civil War, to Japanese engagements with the Allies in Asia and the Philippines, to the death throes of the Third Reich on the Eastern Front.

The ten scenarios spanning this period were developed with tournament players in mind, and are designed for an "expert" level of game knowledge; yet they are accessible to the casual player as well since A Decade of War includes, for the first time, optional "Australian Balancing System" (ABS) provisions for each scenario. (ABS was devised almost two decades ago to allow for scenario side selection via a series of escalating handicap bids. Each player secretly bids on which side and at what handicap level they wish to play; the higher the bid, the greater the handicap.)

Three double-sided 11x16 mounted maps, including a unique river bend, round out the package. Each is completely geomorphic, and compatible with previous ASL mapboards. Offering new and novel map configurations, these are sure to spark the interest of designers and players alike.
A Decade of War contains:

A Decade of War is not a complete product, arid assumes the buyer owns the core Advanced Squad Leader game system.

(source: ?)"MMP has reached an agreement with three ASL legends to produce a new Action Pack. AP6—The Decade of War—will have three new mapboards and ten scenarios using them.

When talking ASL, Gary Fortenberry, Charlie Kibler, and Bob McNamara need no introduction; all three were major figures in ASL at The Avalon Hill Game Company before MMP took over ASL development. The new mapboards—based on a concept that Gary has been toying with for a number of years—resemble two half-boards placed side-by-side and allow new mapboard configurations not possible before. The scenarios consist of a battle a year for the ten years 1936-1945 and feature the combined research and design skills of Fort, Charlie, and Mac."