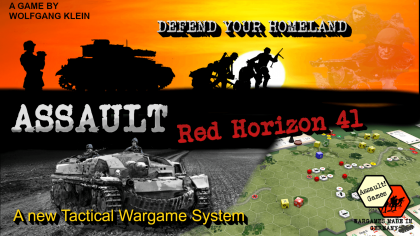 Assault &ndash; Red Horizon 41&#10;&#10;is the first volume in a planned series of tactical level wargames in which players lead historical units into battle during Operation Barbarossa (June through October 1941). A Clash of Titans &ndash; the German Army and the Soviet Army fighting one another in a life and death struggle with infantry, artillery and armored units.&#10;&#10;Assault &ndash; Red Horizon 41 is intentionally not intended to be a simulation, but rather it abstracts certain aspects in favor of playability and manageable game length to convey the feeling of comprehensive tactical combat situations.&#10;&#10;Read more about and find our Kickstarter page here:&#10;Find more: https://www.facebook.com/assaultgamescom&#10;Kickstarter: https://www.kickstarter.com/projects/rh41/assault-red-horizon-41&#10;&#1... Mechanics and rules: &#10;&#10;The Assault Game System is designed to be completely modular and to accommodate a wide range of preferences for those playing it. There are different scenarios that the players can choose from, and within these scenarios, the Order of Battle can vary through the use of Formation Cards. In each scenario, rather than being given a set Order of Battle, the players will randomly select Formation Cards (infantry, artillery, or armor/vehicle) based on the side they are playing.&#10;&#10;The Formation Cards give the player a certain number and type of units available for the scenario. This ensures both variation and regular surprises, since the make-up of your forces will change from game to game. Your High Command has assigned you certain units to achieve a particular goal; you will have to adjust your individual tactics based on the available units and the objectives you have been given!&#10;&#10;Units in the Assault Game System are activated by Command points. Players receive a certain number of Command points, which are listed on the Formation cards. Before Command Phase, players secretly decide (behind a small screen or divider) which units to activate in the current turn. The Command point allowance lets the player activate approximately 75% of all available units. Thus, players must set priorities for the turn. Not only does this speed up the game play, since all units are not used in each turn, but it also makes for some exciting moments in the fight.&#10;&#10;In the Assault Game System, we have tried to minimize the counter stacking issue. With many game systems in the hobby, you can find towers of counters and markers on certain hexes of the game board. The overview is then quickly lost. In the Assault Game System, there is a clear limit of one unit counter per hex, with the exception being when units in are being transported. In addition, there is usually only one command and/or status marker.&#10;&#10;Regarding Command and Unit State Markers, we have devised a simple double-marker system: each marker is double-sided and after the end of the round, in the Organization Phase, the markers are simply flipped or removed depending on their color. This helps to speed up play.&#10;&#10;In general, Assault has attempted to emphasize game flow. The fact that Command Points are assigned to activate units in the Planning Phase accelerates the game. Since the units to be activated are already established before the Action Phase, there is less for the player to think about and fewer opportunities for AP to set in.&#10;&#10;The Dynamic Campaign System: &quot;Crossing the Narew&quot; &#10;&#10;&quot;It is the end of June 1941, when the German Wehrmacht begins the largest land operation of World War II, Operation Barbarossa. More than four million German soldiers are in their starting positions on the eastern borders of the German Reich. The strategic objective is the capital Moscow. To be successful, the operation must combine strength with speed. Key to this will be seizing control the bridges that lie between the German Wehrmacht and its ultimate prize.&#10;&#10;In this campaign, players take on the role of a company commander in order to achieve victory for their own faction. Each serving in the ranks of one of the two divisions that took part historically, the German 7th Infantry Division and the Soviet 13th Rifle Division. The campaign consists of four connected battles and covers the period 24-25 June 1941. This campaign is in line with historical operations for crossing the Narew River. This crossing was important and had to be achieved quickly in order to close the town of Bialystok and the connected basin.&quot;&#10;&#10;Another aspect that sets Assault Red Horizons &rsquo;41 apart from the competition is our Dynamic Campaign Systemwhich will be included in the base game. We have designed a system whereby multiple scenarios can be linked with a variable starting set up for each subsequent scenario dependent upon how many of the victory conditions each side achieves. The players conduct operations, each commanding a company of troops from regiments that actually served on the Eastern Front. The campaign includes 8 different plots for a high replay value.&#10;&#10;