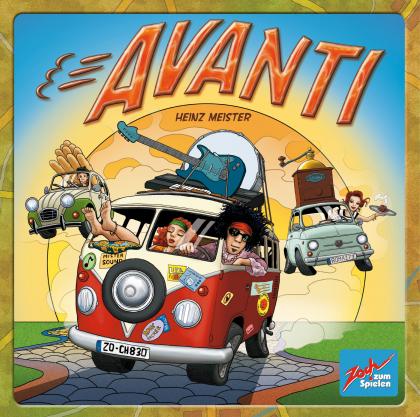 Avanti is themed around players racing to provide concert goers and fashion show attendees with special treats before a competitor can do likewise, but at heart the game is a race with those lagging being forced to pay whoever is in the lead after each round.

Each player starts the game with money and three randomly dealt Power cards, with these cards being triangular and having a number from 1 to 7 in each corner. The race takes place on a circular track, with the start/end space being chosen by a player for the first round.

On a turn, each player selects one Power card in secret, then lays it down with the value being played pointing toward the game board. Players reveal their cards one at a time, moving forward on the track; if a player would finish his movement on an occupied space, he moves his vehicle the same number of spaces once again, repeating this process, if needed. Once everyone has finished, each player pays the leader the amount showing on the space where his car stands.

If a player chose 1-3 for his movement, he draws a replacement Power card; otherwise, he must use one of the cards remaining in hand. The round ends once a player reaches the end marker or once all players cannot or choose not to play a Power card. The first two (or three) players on the track advance on a central scoring path, with players being able to pay money to advance additional spaces.

Players then reset for the next race with a new hand of Power cards and continue playing. The game ends when one or more players reach the dream island at the end of the central scoring track, with the player who advances the farthest winning. In the case of a tie, the tied player who did better in the final race wins.