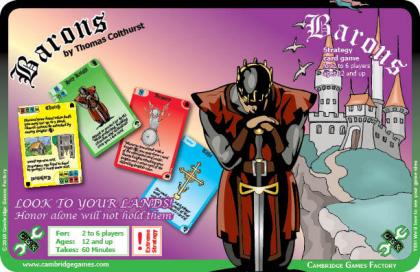 Create a thriving barony by claiming territory and raising buildings. Use actions to gather resources and knights to protect your realm, while avoiding the watchful eyes of the king and pope. Make your barony worthy of establishing the realm’s first cathedral!

The cards have three functions: they can either be used face up as an action, knight or building; face down as land or discarded as money to pay for other cards.

Each player starts the game with a castle card surrounded by one land card of each type. On your turn, you play cards to build your barony and acquire resources, by going through three phases in order.

Play action and knight cards and use building abilities.
Add one land or one building to your barony.
Tax up to four adjacent lands in your barony to draw cards.

To win, you must first build a Church and then a Cathedral in your barony. The game ends immediately when someone builds a Cathedral.