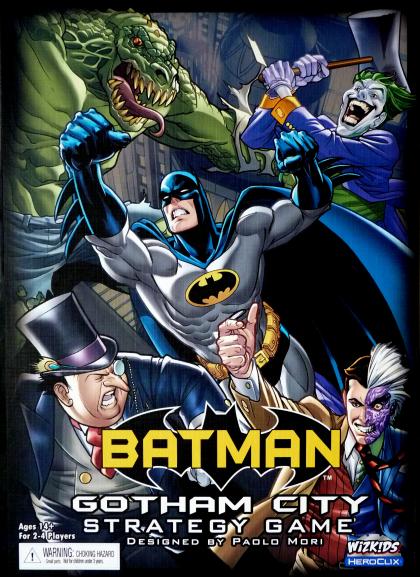 Behind the façade of the great Gotham City lies an active underworld of criminal activity. In Batman: Gotham City Strategy Game, you'll play as one of Gotham City's greatest villains – The Joker, The Penguin, Killer Croc, or Two-Face — and lead your gang of henchmen to try to become the King of Crime in Gotham City! But beware, as your hold on the city increases, so does the chance of your plans being foiled by Gotham's protector – Batman!

During the game, players collect resources of information, money and threat; threat is used to exert your rule over blocks in Gotham City, and control of blocks allows you to collect income on these blocks of either information or money. Money is used for leveling and to hire henchmen who will help you rule city blocks and fight better against other villains and Batman. Information is used for leveling and moving your villain and henchmen through the city blocks. Leveling works as follows: Each villain has a combat dial with ten levels. Each click of the dial shows a requirement that you will need to advance to the next level: information, money, henchmen, or blocks controlled. The first player to reach level 10 with his villain wins. On every even number level, players will acquire special abilities unique to their villain.

Each turn a player will play a Criminal Plot card which will either produce an income for the ruler of a certain block or trigger the Bat Signal, which calls in Batman! When Batman moves into a block with a Villain, a fight occurs using the two custom Batman dice included with the game. If Batman wins, the villain and his henchmen must flee to their hideout and Batman restores order in that block of Gotham City; if the villain wins, they have defeated Batman (for the time being) and Batman returns to the Batcave, increasing his combat effectiveness as he plans for the next encounter.