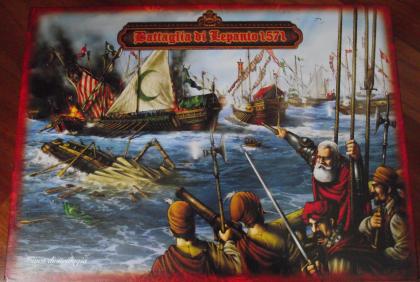 Italian boardgame for 2 players that simulates the Battle of Lepanto between Christan and Ottoman fleets.
The game includes a hex map depicting the sea and part of the coast, on which the players will setup their fleets of wagalleys. Each wargalley is represented by a hexagonal tile with all important data on it, and with two side (normal and damaged).

Taking turns, the players will give orders (move, board, fire or ram - this last one only available to Ottoman galleys) to their fleet and move their ships in order to win the battle. Orders are issued using Order cards, while the combat is resolved with 6-sided dice. Boardings are resolved by playing tactic cards, attempting to outmaneuvre the opponent. When a player cannot play a tactic card that "parries" his opponent's the boarding is resolved with a roll of dice.

The game lasts 7 turns under the basic rules, and ends when a flagship is captured or destroyed. The game comes with advanced rules for capturing ships, playing the game in 14 turns, adjusting cannon fire, and using different victory conditions. The full colour manual comes with a good historical background and original illustrations.

While self-published the quality of the components is quite good. Contents list as follows:

Note: the game is only in Italian.