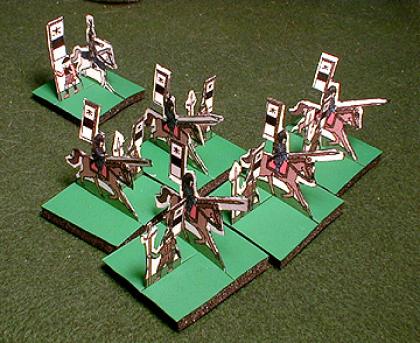 “The Sengoku or ‘Warring States’ period of Japanese history lasted from 1467 - 1615 AD. During this time warlords and their samurai armies waged civil war. In 1590 Toyotomi Hideyoshi succeeded in uniting Japan under his rule. After his death there was a power struggle between a coalition of Eastern clans led by Tokugawa Ieyasu and a Western coalition led by Ishida Mitsunari."

"Their final showdown occured near the town of Sekigahara in 1600 AD. The armies were evenly matched. Mitsunari deployed his army to block the vital Nakasendo road, with Kobayakawa Hideaki's large clan in position to threaten the Eastern army's left flank. However Hideaki had secretly promised Ieyasu that he would switch sides once the battle started. The Eastern army launched a determined attack and made good progress. Slowly the Western army drove them back and began to counterattack. Mitsunari and Ieyasu both tried to convince Hideaki to intervene on their side. Finally he made his decision and charged down the hill right into the flank of the Western army. His betrayal was decisive, and the Western army was routed.”
A miniatures wargame intended for classroom use with two teams of students (grades 6-8). The game is designed to be played on a 7.5x5 foot table using 1/72 scale plastic miniatures mounted two per stand. Free print-and-play paper miniatures are also provided for use with the rules.

Each army is composed of six clans, plus the Hideaki clan which starts with the Western Army but may switch sides. Units portrayed in the game include samurai, arqubusiers, ashigaru spearmen, cavalry, and commanders.