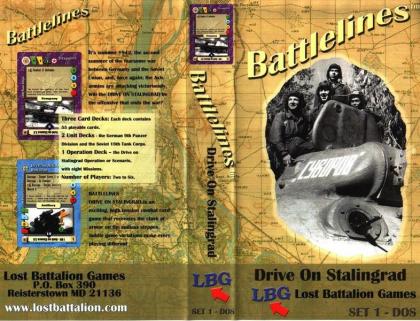 (From the Publisher)
The Battlelines™ series of card games allow players to recreate the epic struggles of World War II. Each player uses a deck of cards to represent the troops of an historical formation about the size of a division. A third deck, the Operation deck, is used to create a series of battles using Mission and Location cards. Points are scored for achieving Mission objectives and destroying enemy troops. A typical 100 point Operation can be played in about an hour. The game can also be played by teams of up to three players on each side.

This, the first in the Battlelines™ Series World War II card games. It includes Units and Operations from the German 1942 offensive against Stalingrad, the Soviet counter-attack (Operation Uranus) which trapped the German 6th Army in the city, and the gallant efforts of 4th Panzer Army to relieve their surrounded comrades (Operation Winter Storm).

Unit Decks represent divisional level assets. They are the basic play decks. One is needed for each player. Operation Decks are used to generate a "random" series of "scenarios" depicting several days of fighting. Higher Echelon Decks will allow players to introduce new cards into their Unit Decks to liven up the game and surprise their opponents with new stratagems.

The decks are not "collectible" per se. There are no "rare" cards to collect. They can however be customized by mixing in units from "higher echelon" decks that are available. The game is considered "expandable" since there are many different decks (sold individually) that can be played against each other.