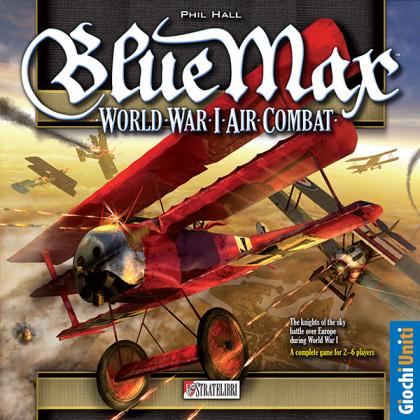 In Blue Max, each player pilots a WWI airplane in a dogfight. The game can be played as a campaign, with new planes becoming available as time passes, and with surviving pilots getting better at what they do.

Each plane has a maneuver sheet showing which ones it is allowed to do -- some maneuvers can only be executed by ace pilots, and other maneuvers are "restricted" in the sense that they can't be repeated from one turn to the next (the plane would stall).

If you "tail" another plane, its pilot must show you whether he's going right, left or straight ahead. You get to shoot ahead of your plane, unless you have a bomber with an observer/gunner in the back (swivel-mounted guns). Damage is rolled on a table that determines severity in terms of blue and red hits; you then draw the indicated number of coloued chits from a cup. Hits are taken to the wings, tail, engine, etc. There's a chance the pilot is killed, or that the plane catches fire.

Fuel eventually runs out and the pilots fly off to meet another day --if they survived.
This is a lot of fun with massive numbers of players; you can put the 20-odd planes on the map at once, balancing the better airplanes with weaker pilots.

The 2014 edition of Blue Max had substantial changes, and can be found with its own game page HERE.