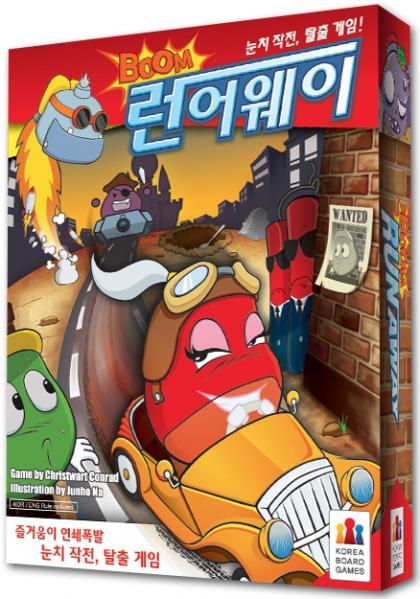 Boom: Runaway is a light bidding/bluffing/deduction card game in which the players want to help peace-loving bombs flee from an armory so that they can live out their lives in peace not blowing anyone (and themselves) to bits. If too many bombs try to leave at once, though, the armory guards could force them back to work.

In game terms, each round you reveal a guard card that shows a number for each of the five colors of bombs in the game. Players have a hand of bomb cards, and they first simultaneously reveal one card, then they simultaneously reveal two cards. After this, players now compare the sum for each color of bombs played. If the sum is equal to or lower than the guard's value, then whoever played the highest block of this color earns points equal to the value of the cards played and everyone else scores one point per card of this color; if the sum surpasses the guard's total, then the player with the highest sum throws away his cards of this color, then you recheck the sum. After checking each color, you reveal a new guard, then continue play.

The game ends when at least one player has played a certain number of cards from his hand, at which point the player with the most points wins.