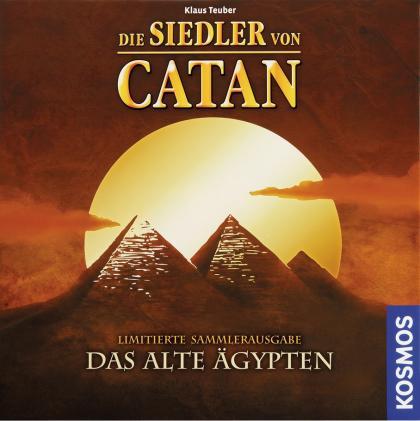 For Catan: Ancient Egypt, designer Klaus Teuber has transformed his best-selling game The Settlers of Catan to a new location and time, with players now living in the time of the Pharaohs and using their oxcarts to move resources to build small villages and great temples styled after some of the most interesting buildings of Egyptian antiquity. As always, you must beware of the robber! His chariot can interrupt production at your cattle pastures, papyrus groves and quarries.

After you master the Catan: Ancient Egypt base game, you can try these variants:

Help from the Gods: Ten god cards are now available to player, with their powers adding a variety of options for dynamic gameplay.
The Great Pyramid: Players can now build and move papyrus boats across the Nile to compete for the pharaoh's blessing and the vizier's favor by building blocks onto the great pyramid.