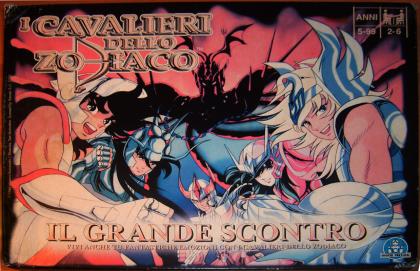 Il Grande Scontro is a game where you, as a Knight of Athena, battle enemy knights to accomplish a secret mission.

You choose one of the six Bronze Saints/Knights (Pegasus, Cygnus, Dragon, Phoenix, Andromeda and Unicorn) as your charachter, then draw a Mission Card, which is kept secret (if you wish).
Then you move around the three-levels board fighting enemy knights, represented by face-down counters scattered on the board.

The winner is the first player who accomplishes his mission (usually to fight and win a certain number or specific knights).

When you stop in a square with a face-down counter, you reveal it and fight that Knight; after the fight, whether you win or lose, you put the enemy counter face-down again. They have different power levels, so some of them are more difficult to beat. Fights are resolved using a die. If you lose the fight, a piece of your armour is removed. Once all of your six armour pieces are removed, you'll lose every fight you get involved in, until you repair your armour.

Among the enemy knights there are good knights (they're face-down counters too): if you reveal them, they shall give you a Gift (card) to help you in battle.

You should remember the position of the enemy knights (and/or the good ones) once they are revealed and put face-down again. Each player, at the end of his turn, moves two of the face-down counters around the board. You can move these counters to block the way to other players or even in a square with another player to force him to fight with the enemy knight you just moved! So, if you remember which knights are hidden on the counters you move, you can i.e. move a strong enemy knight towards another player, or a good knight toward you and/or far from other players.

Armour repair can be done in two ways: finding the counter representing the Gold Kinght of Aries, or passing through the Temple of Aries, located in the center of the top-level board.

Each of the three pieces of the board can be rotated before being placed, so the whole board can have a few different configurations.