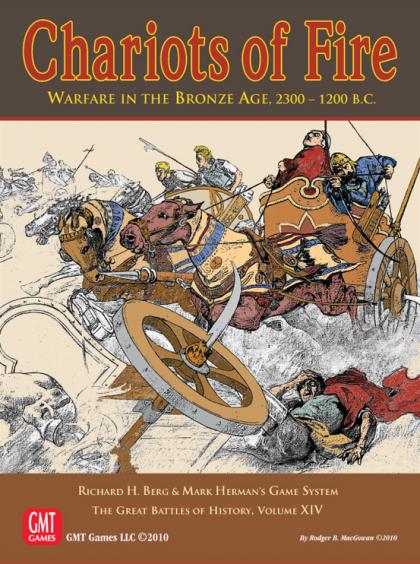 The Great Battles of History series ventures back into the mists of time: the Bronze Age, or the Age of the Chariot. From approximately 1700 BC to 1200 BC (which was the abrupt end of the Bronze Age) the chariot reigned supreme on the battlefield. It was the first modern weapons system, and chariots controlled most of warfare until actual cavalry appeared in the middle of the Iron Age.

But how did chariots work as a tactical weapons system? There is no complete historical agreement on what exactly they did or how they were used, but Chariots of Fire will show you our view of their many applications - and many types of chariotry there were - providing GBoH players with the complete and definitive chariot rules. These rules cover combat and mobility from the first battle wagons of the Sumerians to the two-man, fast-moving light chariots of the Egyptians, often complete with their associated and specialized Runner Infantry, to the heavy 3-man Hittite wheels.
To simulate these ancient tactical details Chariots of Fire presents you with nine battles:
Sumer (ca 2320 BC) - featuring the legendary Sargon the Great
Sekhmen (1875 BC)
Megiddo (ca 1479 BC)
Senzar (1470)
The Astarpa (1312 BC)
Kadesh (1300 BC)
Nihriya (1230 BC)
Babylon (1225 BC)
and Troy (1200 BC) - including an extra: Homer's heros!

And of armies Chariots of Fire has plenty, and a truly colorful bunch they are: Sumerians, Akkadians, all sorts of Egyptians, Canaanites, Hittites, Mitanni, Arzawans, Assyrians, Babylonians, and the Myceaen Age Greeks.

Historical Note: The period following The Bronze Age, from what is known as The Catastrophe of ca. 1200 BC to the rise of the Greek city-states, is almost totally devoid of any sort of information, and that includes archaeological remains. It is the true Dark Age of history. When the area emerged from that era, warfare had undergone major changes and chariots had been relegated to the sidelines.

Three errata counters for Chariots of Fire were included in C3i #24.