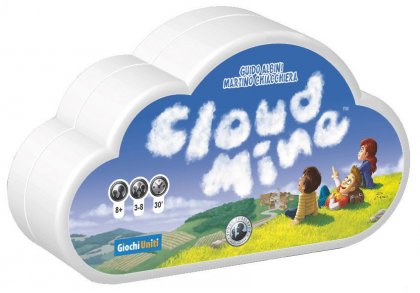 In Cloudmine, players alternate being visionaries and cloud hunters in order to catch the largest number of clouds.&#10;&#10;During a turn, one player takes the role of being a visionary by choosing a particular cloud card from a number of cards drawn from the top of the deck corresponding to the number of players. They then attempt to mislead the greatest number of other players, who are cloud hunters, in an effort to gain points. To do this, after choosing a card, the visionary makes up a story of at most five words, then splays the cards on the table, and the cloud hunters in turn attempt to guess the visionary's chosen cloud. If the hunters choose a card that's not correct, the chosen card is given to the visionary, and play passes to the next hunter. If the chosen card is correct, the visionary earns points for every card they've already gathered.&#10;&#10;After a set amount of turns, where each player gets a chance to be a visionary, play concludes, and the player with the most points wins!&#10;&#10;