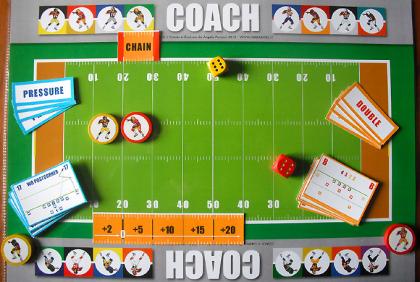 The board game COACH, dedicated to the sport of American football, has been playtested for more than twenty years.

The gameplay each turn is simple and intuitive: The player on offense chooses an Offensive Card, while the player on defense chooses a Defensive Card. They reveal the cards simultaneously, then consult the play table to determine the line of the first attempted tackle. The player on offense can roll the dice to try to gain extra yards, with the "Progression Line" on the side of the field affecting the outcome of the roll. The more impetus the player has, the better the probabilities of breaking the tackle.

Conservative plays gain fewer yards but guarantee good ball control; aggressive plays like long bombs may lead, of course, to both faster touchdowns and a greater risk of fumbles and interceptions. The riskier the play, the greater the chance of a tunrover.

When playing COACH with four, players compete on teams of two, with one player serving as offensive coach and the other as defensive coach. Lots of different color combinations are available for the pieces and dice in order to customize your team as you desire.