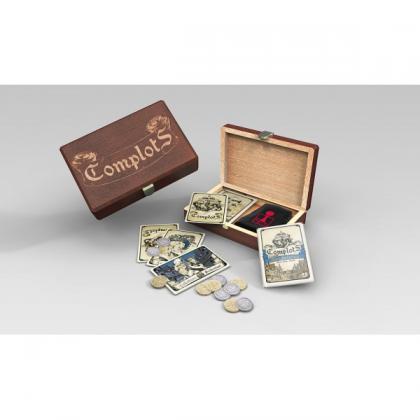 In Coup, you want to be the last player with influence in the game, with influence being represented by face-down character cards in your playing area.

Each player starts the game with two coins and two influence – i.e., two face-down character cards; the fifteen card deck consists of three copies of five different characters, each with a unique set of powers. Players take turns taking various actions with the goal to reduce all of his or her opponents to 0 influence. The last player to still have influence – that is, a face-down character – wins the game!

Its expansion, Coup: Reformation, adds new cards to the game and rules for factions and team play that increases tension.

Each player must declare himself either a Loyalist or a Resistant and can target only members of the other faction. Conversion is possible for yourself or for another player by paying a charitable donation to the Treasury. Like all factions, once you have eliminated or converted the other group, you just descend into in-fighting, so there's still only one winner and no second place.