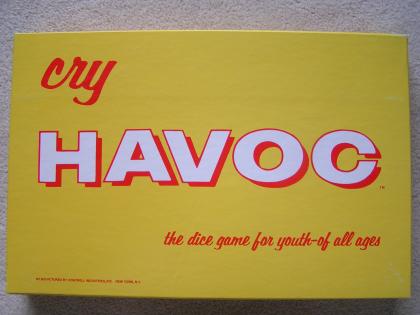 Each player has two dice to move around the board which has an Inside and Outside track. A dice on the Inside track must be moved before one on the Outside track. Dice on the Inside track move the number of spaces rolled and try to get back to the Outside track. Dice on the Outside track have more interesting movement options -- (a) move the number rolled, (b) roll 2,3,4,5 and move to that space on the Outside track if it is empty, (c) match a number showing on an opponents dice and take it's place while moving it to the Inside track, (d) roll one less than a number showing on another dice and move to the space just in front of that dice, (e) roll one more than a a number showing on another dice and move to the space just behind that dice. Any move that causes one to land on an opponent's dice, moves that dice to the Inside track.
The game goal is to land one's dice on one's GOAL space on the Oustside track. Each time a player scores a goal, he moves the scoring cube one stage on the scoring track towards his High Stage. The scoring track is in the shape of an X. The four tips of the X are the High Stage for each player. The center of the X is the Zero Stage. If another player scores first, a second scoring player would move the scoring cube back to the Zero Stage. From the Zero Stage, a player would win by scoring 3 consecutive goals.
There is also a short version of the game where the scoring cube is not used and the first player to 3 goals wins.