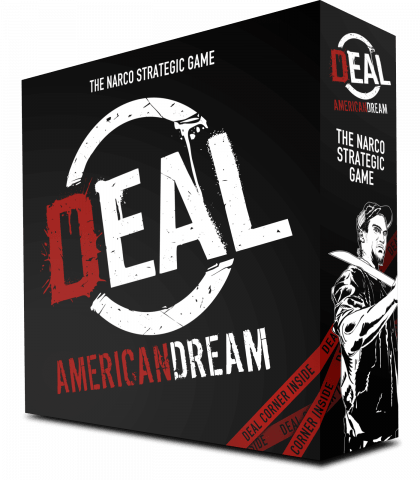 Deal: American Dream is a board game for 3 to 6 players. Each player masters a clan and competes for the dominion of drug trafficking in the Americas.&#10;&#10;Deal: American Dream is a strategic game where players recruit troops and clash over territories. Additionally, it incorporates an economic dimension; you can produce or buy dope, and sell it by striking deals with other players rather than confronting them. As every narco knows, spilling blood ain&rsquo;t always good for business.&#10;&#10;Finally, Deal: American Dream also has a roleplaying aspect to it; each player has secret objectives that require the use of deception and bluff. Regardless of which avenue to power you take, in the end, there can only be one winner: the first one to earn 10 respect points takes the cake. Every game of Deal: American Dream is unique and brings its share of negotiation, alliance and, of course, backstabbing!&#10;&#10;All the components needed for a game of Deal Corner can be found in the Deal: American Dream's box. It was available separately in the Kickstarter.&#10;&#10;