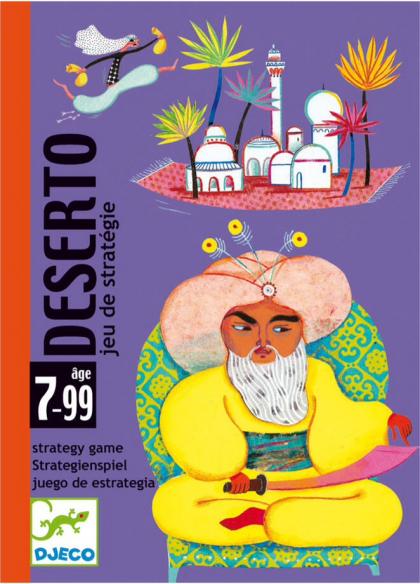 Place a thief next to the treasure and it's your - Easy! But watch out for the caliph! To win, you'll have to play your card right in this tactical challenge!

Each players is dealt 3 cards, the rest of the cards are placed face down on the table. The top fours card is turned over and put face-up in the middle of the table. The playing area is formed by 4 cards laid out 2x2.

In each round, the player chooses one of the three cards in their hand and places it in the playing area. Then they pick up a new card from the pack.

One card cannot be put next to (vertically ou horizontally) a more powerful card: you cannot put a treasure next to a thief, or you cannot put a thief next to a vizier.
If the card put down is adjacent to one or two weaker cards, the players wins the adjacent cards or pile of several cards.

When the pack has all be taken and all cards held have been played, the game is over. The winner is the player who has won the most cards.