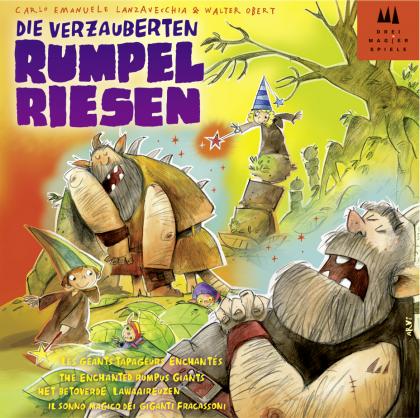 In Die verzauberten Rumpelriesen, the magician players want to find imps hiding in the leaves that cover the forest floor around them – but they must search carefully to find these imps so that they don't wake the sleeping giants guarding the land. Oh, and they'll need to search quickly, too, or else the giants will wake from the sleeping spell cast on them and run the searchers out of the forest. Who can combine speed, control and a good memory to find the imps where they hide?

To set up, players place the 16 imp tokens in the holes on the game board, cover these imps with the 85 cardboard leaves included in the game, then place one large wooden giant on each corner of the board. On a turn, the active player reveals a search card showing one of the imps. An opponent flips the sand timer, then the player uses her magic wand to push the leaves aside and (fingers crossed!) find the imp on the search card. She can use her wand to move the giants as well, but if they fall off the game board – or even so much as a single leaf falls – the giants awaken and chase the player away empty-handed. If the player reveals the target imp, though, she keeps the search card to record her find. After each search, players cover the board again and return the giants to their places. In the end, whoever has collected the most search cards wins!

Die verzauberten Rumpelriesen includes rules for cooperative play, with the players using their wands together to search for the imps one by one as they're revealed by the search cards. If the players find more than eight imps without the giants awakening, they win.