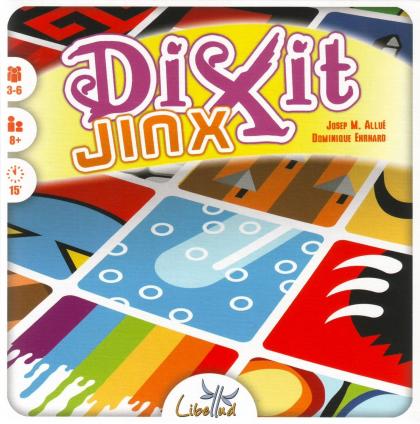 Jinx is a new Game in the Dixit family. Unlike the original game, the drawings are not realistic illustrations depicting scenes but more abstract images.
During the game, 9 cards are placed face-up in a 3x3 square. The active player draws a locator map that will show him which of the nine cards he will play with. This location is kept secret.

The player speaks, sings, or acts out something relating to this card (just as in "Dixit").
The other players go around and point to the card they think is correct. Only one player can point to each card. Once a player has chosen the right card, the turn stops. The player who finds the right card keeps it. Each card counts as a victory point. Players who were wrong give their cards to the active player. But if neither player gets the right card, the active player must return a previously won card.