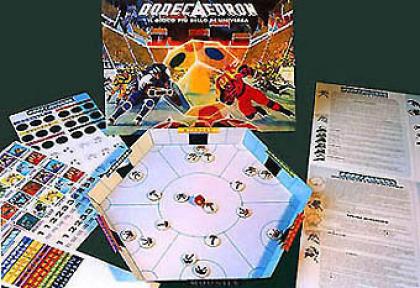 This Italian game simulates a "futuristic" sport in which heavily armored players struggle to move a gigantic Dodecahedron(hence the name of the game) and score points for their team. Each team has three kinds of players that cover different roles in a match.
The movement of counters on the game field is performed by pushing them with the finger. They try to hit and push the Dodecaedron towards an opponent's goal and stop it in the goal area. The first to score 12 points is the winner.

The game since 2011 comes with athlets counters mounted on coloured wooden discs. Six complete teams are included in the game.