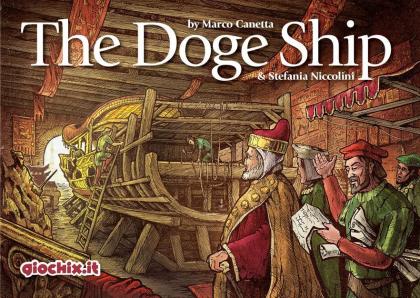 Venice, five centuries ago – In order to celebrate the glory of Venice, the Doge, the maximum authority of the Republic, ordered the construction of a new state ship.

In The Doge Ship, the players play the role of the most skilled shipbuilders of Venice who are called by the Doge to cooperate on the construction of the new ship. Each player has to build parts of the Ship in order to earn victory points, but also Gondolas to get money, and Barriers for the protection of the shipyard and the city. The task is not easy: At the beginning of each round, the cost of the actions might change, as well as the demands of the Doge. When the construction of the ship is finished, only one will be the winner and will gain the favour of the Doge.

In this game players have to manage their five actions per round competing with other players on these available. Players can work on a part of the Doge Ship to gain VP, on Gondolas to make money, or on Barriers to protect Venice from High Water effects and save their shipyard. Manage money is fundamental as all materials costs something. The game ends when the Doge Ship is complete.