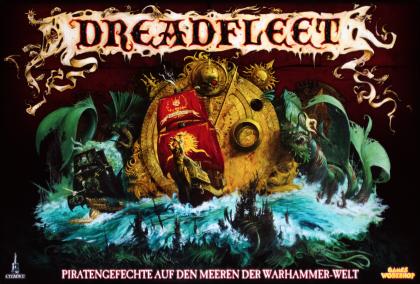 For two bleak decades the Undead reavers of Count Noctilus have plagued the oceans of the world. After each raid, the Dreadfleet disappears into its lair as quickly and silently as it appeared, far from the reach of Man. And yet there remains hope. Captain Jaego Roth of the Heldenhammer has vowed to hunt down and destroy Count Noctilus and his Undead captains once and for all. With him sail the most notorious and cunning of the pirate lords of Sartosa, each borne to battle upon a giant warship bristling with cannons, organ guns and bolt throwers. At the stroke of midnight on Geheimnisnacht, most forsaken of nights, the Heldenhammer and her companions sail into the realm of undeath known as the Galleon's Graveyard. One by one, Count Noctilus and his vile allies move in to stop them.

Dreadfleet is a boxed game for two (or more) players that includes everything you need to make war on the turbulent seas of the Warhammer world. At your command are two fleets of ships: the Dreadfleet led by the Vampire Count Noctilus, aboard his gargantuan sea-hulk the Bloody Reaver; and the Grand Alliance commanded by the Pirate Captain Jaego Roth, who recently stole the Heldenhammer – the pride of the Imperial Fleet, and one of the largest galleons to ever sail the high seas.

As your ships engage in furious battle, it's down to you, the fleet captain, to make important split-second decisions. Do you bring all guns to bear on the closest enemy warship, or do you sail into position for a furious broadside? What happens when the warship catches fire, or worse, the powder kegs ignite? Exactly how much punishment can your warship take before it sinks without a trace? Are those Undead seagulls or flying piranha fish? And, when all else fails, do you have the courage to ram your foe, board their ship, and engage them in a duel to the death?