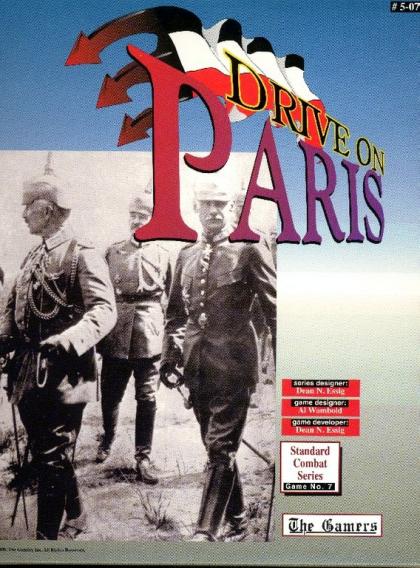 Drive on Paris, is a game simulating the first 100 days of fighting on the Western Front during World War I.

The mobile campaign of 1914 in the west was the result of more than a generation of staff planning on both sides. The German General Staff had prepared the Schlieffen Master Plan of a giant right hook into France which its namesake had hoped would result in a Cannae-like battle of annihilation of France. The French believing that an attack would always win and that elan would carry the day, prepared to assault the lightly held German lines in Alsalce-Lorraine.

Drive on Paris allows both sides to execute the historical campaigns or variations on them and are rated for victory on how well their operation succeeds. Players can rearrange their Mobilization Points to change the change the force allocations from the historical ones to reinforce their effort or to better counter the enemy's.

Both side must rapidly attack and defend at the same time...and you'll never have enough troops and power to do both perfectly, so your allocation of scarce resources will be the key to your success.

This system uses a two-tracked method of determining victory. It isn't the usual "one side tries something, while the other tries to stop it". Rather, both sides must strive toward their own goals while putting forth enough effort to stall the enemy. It is possible for both sides to "win" ending the game in a net draw (which is why you'll need to dedicate some effort to stopping the enemy support).

Drive on Paris is the seventh game in the popular, easy-to-play Standard Combat Series. These games are designed to be easy enough for novice players, yet meaty enough to retain the interest of veterans. It violates two principals of game design at the same time: Easy games are dumb, and the converse that interesting games are hard. The SCS challenges these bogus assertions...and has successfully done so for eight years now.

Part of the Standard Combat Series by The Gamers.