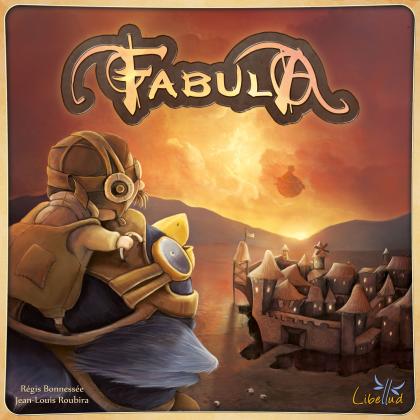 Fabula (previously known as Grimm) is a story-telling game where players must fill in parts of a story. One of them is the teller, who read (or imagine) the beginning of a short tale — his/her current draft. Each other player incarnates a tentative hero (a gnome, a princess, a little boy, etc.) who tries to be the main character of the teller's tale. 3 times during the game, the teller asks the other players how they think things happened at that time of the story. They must choose an item depicted on one of the cards laying at the center of the table and use it to continue the story. Depending on how convincing they are to the teller, and how well they integrated their character and the item to the current twist, they get points in the shape of "quill" markers. Each item can only be used once by any player, who keeps it afterwards, and who puts his/her markers on top of the card.

At the end of the three turns, the two players with the most quill markers are selected to compete in the epilogue. The teller reads (or makes up) an idea of an ending to the story. Now, each finalist in turn has 30 seconds to present a relevant proposal for including his character and both items figured on the two remaining cards on the table into the ending. (A sand timer is included.) Both players have to use the same two objects, but the second one speaking cannot use them in the same way than the first (more or less compensating the fact he had more time to prepare his part).

Eventually, the teller decides which of the two finalists wins, depending on the relevance of their proposals.

The game comes with two proposed variants :
- "Experienced players" : all the players tell the same tale, each one adding an element to the same storyline and bound to continue using the plot of the former speakers.
- "Collective" : there are no quill markers and appraisal given by the teller. Every player takes part in the epilogue, and there's no winner.