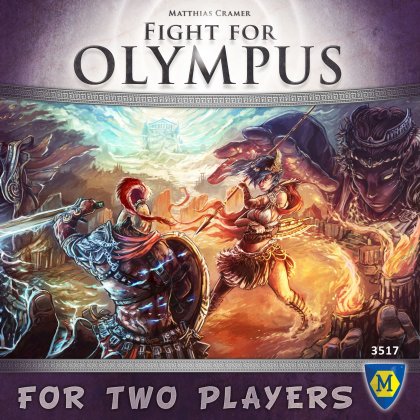 In Fight for Olympus, two players battle for control of Olympus by pitting demi-gods, titans, and soldiers against one another.&#10;&#10;In game terms, players face off on opposite sides of a game board with each player having six spaces for playing cards: three for military conflict, two for control of power discs, and one for control of resources. On a turn, a player plays as many cards as desired by paying the cost of each card &mdash; that is, discarding cards of the proper colors that match the cost of the card being played &mdash; then placing the card in an empty slot on their side of the game board. Many cards have powers that take effect when played.&#10;&#10;After playing cards on a turn, each card does damage equal to its strength to any opponent's card on the other side of the game board. If no opponent's card is present, then with military power the player does damage directly to the opponent, swinging a pendulum of strength in their favor. If you reach a total of 7 on the pendulum, you win. Your troops can also grant you an additional card at the end of the turn (three instead of two) or tokens that make it cheaper to play cards.&#10;&#10;Instead of winning via military, you can instead win by having all six slots on your side of the board filled with cards at the start of your turn.&#10;&#10;