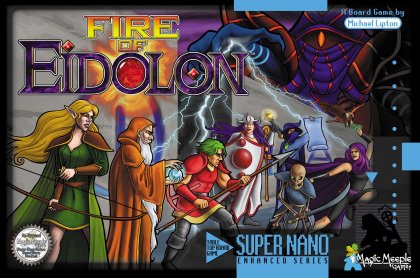 HOOK: Co-operative, diceless, dungeon exploration with a retro videogame flair, all in a super-portable package.&#10;&#10;DESCRIPTION: The Fire of Eidolon is the quintessential source of light magic in your world and it has been stolen by the agents of the Dark Sorcerer, a being of untold power and horror who intends to bury it forever in the very same void that imprisons him, even if that means sealing you inside with it!&#10;&#10;It is up to you and your band of brave Heroes to recover the Fire of Eidolon and extract it from the dark void Dungeon before its arcane light is extinguished forever. Your quest is to search through the Dungeon before you, Challenge the horrors inside for their trophies, and Break the three Dark Relics sealing the Fire to reclaim it...and then you have to escape. Are you up to the challenge?&#10;&#10;GAMEPLAY: Fire of Eidolon uses a diceless action-point system to facilitate quick gameplay which is easy to learn to deliver a super-rich experience in a super-small package.&#10;&#10;Players will take turns using their allotment of action points to accomplish several tasks:&#10;&#10; Exploring new Dungeon Chambers&#10; Combating the Challenges waiting within those Chambers to collect their Tokens of Power&#10; Deliver enough Tokens of Power for each of the three given types to break the respective Dark Relic that is keeping the Fire of Eidolon from rescue&#10; Collect the Fire of Eidolon, and escape the Dungeon alive&#10;&#10;&#10;&#10;&#10;But nothing is as easily done as it is spoken; while the heroes frantically fight to recover the Fire of Eidolon, the Dark Sorcerer's brainwashed Cultists will continuously appear, starting evil Rituals onto the chambers, in hope of warping them away into the Void with valuable Tokens or Heroes still inside. You and your Heroes can easily disrupt these Rituals, costing you only your precious, valuable time...but ignoring them may close off your last path to the outside world, and the last light your people will ever see.&#10;&#10;Tread carefully and work together to reclaim the FIRE OF EIDOLON&#10;&#10;