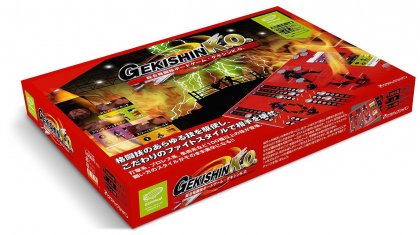 A quick playing 2 player boxing game. There are over 100 different techniques/attacks that can be used. Each one is rated with stats on Damage, Motion (speed), Range, and Target Location. You win by knocking out the other player, which is accomplished by dealing 10 damage to any one area, such as the head, body, or arms. You try to guess where your opponent is attacking as well as roll a die to see if you defend against their attacks. It becomes a rock-paper-scissors type game of guessing.&#10;&#10;The first in Grapac Japan's series of games under the label &quot;Aeronaut&quot;. They are meant to be very fast playing (around 15-30 minutes). They all come in a file-type holder, with the inside of the file being the game board, and all of the components attached to the ring binder in bags and pouches.&#10;&#10;