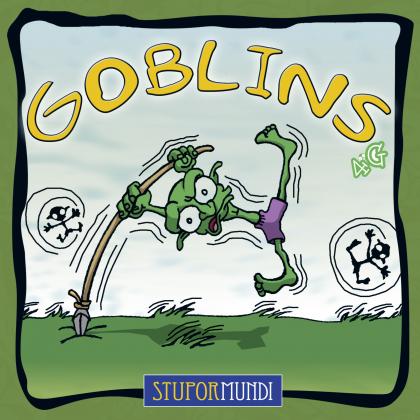 Have you ever played a Fantasy game, killing hordes of useless and stupid Goblins? Prepare to find yourself on the other side of the barricade… Waves on waves of Goblins try to conquer the city of the humans, through debatable strategies, inconsistent plains and brainless "Epic Death".

Goblins is a not collectible card game that melds the bases of the board game with those of the card game.

Raze the town to the ground and loot everything you can find on your way to leading a mob of stupid Goblins! Other Goblin commanders will collaborate on this task as well. Unfortunately, the idea of collaboration among Goblins is a little bit ambiguous. Dealing with useless subordinates and treacherous allies, the enemy will be the last of your problems.

Players must destroy the Town and conquer as many Land Cards as possible. Land Cards will award the owner Victory Points. The player with the highest amount of Victory Points wins the match.

To reach their objective players can rely on Goblin commanders, the alter ego of each player on the battleground; each of these has unique and particular ability to make every game different from the other.

The innovative game system is based on " Goblins flipping". Every choice you make will cause Goblin flip to determine its life or its death. Every Goblin is represented by a disk with two faces: every disk shows a Goblin face on a side and a Goblin skull on the other side.

The game is exciting every moment also when it isn’t your turn. No player will ever be too strong or too weak and the game strategy will change turn after turn suiting better possible the situation.

Through the system of the exhilarating "Epic Deaths ", your Goblins can commit mass suicide in eccentric ways. The “Epic Death” can confuse every enemy and allows you to beat him for the dismay. No player is ever out of the game.

Let the fight for stupidity begin!