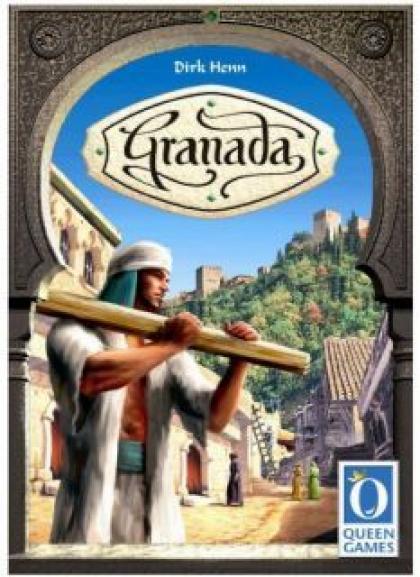 Granada – many artisans, traders and entire families have settled at the foot of the Sierra Nevada because the Palace of Alhambra promises all people work, contracts and above all prosperity.
(From the publisher's blurb.)

Granada is new member of the Alhambra family with a more challenging character: in this standalone game the players develop the city of Granada next to Sierra Nevada, where the famous Alhambra stands, by buying building tiles to construct the city which will earn the most victory points. Building tiles now have two sides and there are new building types for which the value is set during the game.

Play Differences from Alhambra
Alhambra advanced. Play is the same: buy a building tile, take money or remodel. If you buy a tile for the exact amount, you can take another action, same as in Alhambra. The differences: new building types, building values are dynamic, two-sided tiles, and moats instead of walls.

There are no ties in Granada: points are never divided like in Alhambra. In the case of two players having the same number of tiles of a particular type in their cities, the player with the highest valued tile of that type wins, and the other player takes next place. So, in Granada, it pays to buy the more expensive buildings.

Another difference in Granada is that the tiles are two-sided: on one side an even-numbered building of some type, on the other a different, odd-numbered building valued exactly one higher. The configuration of the buildings on both sides is identical in terms of moat placement or lack thereof on each side. When purchasing a building, a player can immediately place the building, as is, into her city or may flip it to the other side and place it in her supply for later placement during a remodel action.

The Building Market is initially filled with tiles even-side up. The next time the market is filled, the odd side will be placed up, then even, then odd, etc. A handy toggle feature is provided on the board near the Building Market to facilitate this.

The last difference between Alhambra and Granada, moats instead of walls, is really just a difference in artwork. As in Alhambra, during each scoring round, each player scores points for her longest continuous moat, instead of wall, surrounding her city. The rules are the same regarding tile placement: must be able to trace an unbroken path back to the city's center, moat can touch moat, etc. In games I've played, players have often commented that it seems to be harder to build with the moat tiles of Granada than with the wall tiles of Alhambra. Just one more way to make Granada an advanced version of Alhambra?