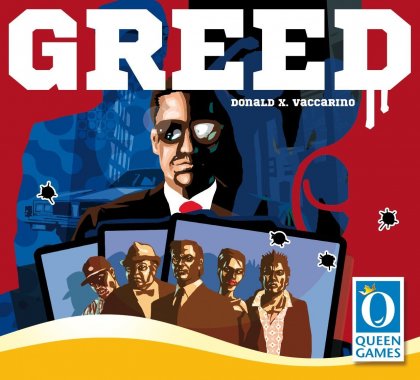 In the card game Greed, crime lords (the players) try to earn more money than anyone else through clever use of their cards.&#10;&#10;At the start of the game, each player receives a random hand of twelve cards from a deck of 80. Players draft one card, pass the remaining cards left, draft a second card, pass again, draft a third card, pass again, then the game changes; players simultaneously choose and reveal a card, carrying out its effects, then they draft another card, pass the remaining cards, play again, and so on until ten &quot;playing&quot; rounds have passed, at which point the game ends and players tally their holdings.&#10;&#10;The card types are thugs, holdings and actions. Thugs and holdings might have a cost to be played (perhaps cash paid to the bank or the discarding of a holding) or a condition that you must meet (having two thugs, for example, or a collection of symbols on cards in your possession) in addition to an effect, which is unique to each card. (Each action has a unique effect as well.) When you play a holding with one or more symbols, you place a token on that card for each symbol on it and an additional token for each symbol of that type already in your possession. These tokens are worth $10k each at the end of the game, and you add this value to whatever cash you've collected through your card plays.&#10;&#10;