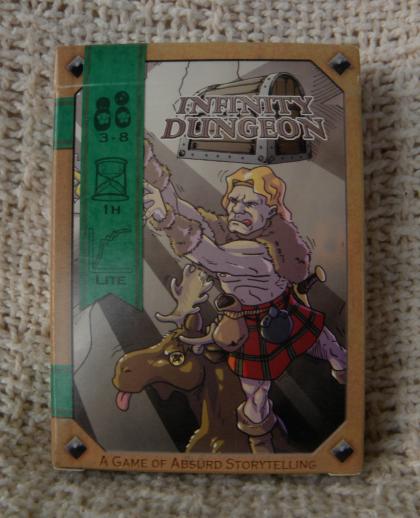 Infinity Dungeon is a storytelling party game for four or more players. Players take on the roles of outlandish characters like the Postman, Rock Star, Evil Overlord, and Archaeologist and must attempt to escape from Infinity Dungeon.

Each turn of play, a room will be revealed from the room deck and read aloud. Each room contains a puzzle, trap, or monster to overcome. At this point, the party leader must describe how he will utilize his own character's powers, plus the powers of his willing allies, in order to get his team safely from this room and into the next.

Each player votes on whether they believe the plan is likely to succeed. After this point, a card is drawn and a random number printed on it is compared to the number of confidence votes the player received. If he meets this number or exceeds it, the GM must narrate how his plan succeeds. If he does not, the GM must narrate how the plan fails and results in his grisly death.

Players who die receive a new character class and get immediately back into the action. When the team completes a pre-determined number of rooms, they win!