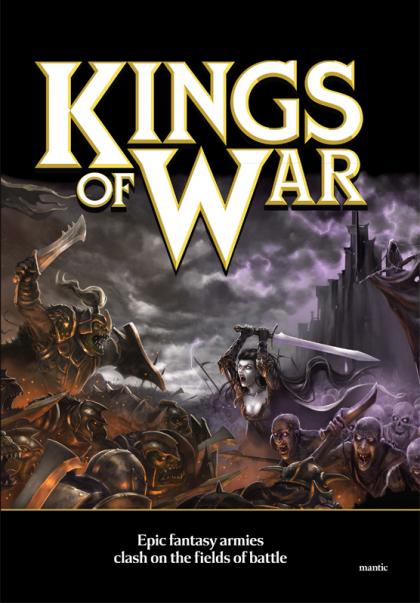 Kings of War is the miniatures wargame from Mantic Games. Designed to go along with the accompanying 28mm Fantasy Ranges the game features players maneuvering large blocks of miniature soldiers around the battlefield in search of victory.

Kings of War is a new concept for mass battle miniature wargaming — a game that is both easy to learn and fast to play! With few and simple rules, there is little to get in the way of the fun and slaughter. Kings of War is a challenging game of strategy, where you can pit your wits against your opponent without devoting half of your brain power to remember a plethora of convoluted rules.

And that’s not all, the innovative turn structure allows you to play Kings of War using a time-keeping tool (like a stopwatch or a chess clock) to time your moves. As the seconds tick away, the pressure and excitement this adds makes 'Kings of War' unlike any other large-scale wargame you’ve ever played before.

Units are given simple ratings such as 'Melee Attack', 'Defense' and 'Nerve' and then augmented with special abilities that characterize the different fantasy races that inhabit the world. In 2015, the "beta" rules were updated and a full ruleset was released. Abbreviated rules are downloadable from Mantic's website, and extracts (about 70%) from the full army lists for all factions are also available for download, called "starter lists". Currently army lists exist for Elves, Dwarves, Kingdoms of Men (medieval humans), Basileans (clerical army with saints and angels), Forces of Nature (Treemen, Dryads and other assorted forest creatures), Forces of the Abyss (devils and demons), Abyssal (evil) Dwarves, Goblins, Orcs, Ogres, Twilight Kin (evil elves) and the Undead hordes.
Additional factions lists are now available in the "Uncharted Empires" supplement: The Brotherhood (high medieval and mystical humans with elementals), Salamander (humanoid lizards), The Herd (satyrs... ok: beast-men), The League of Rhordia (fantasy renaissance humans and halflings), The Trident Realms of Neritica (tritons/ fishmen), The Empire of Dust (aegyptian undead... yes, kings from tombs), Night-Stalker Armies (spirits, ghosts and the like), Ratkin Armies (ska... er, scavenger ratmen) and the Varangur (chao...tic warriors).