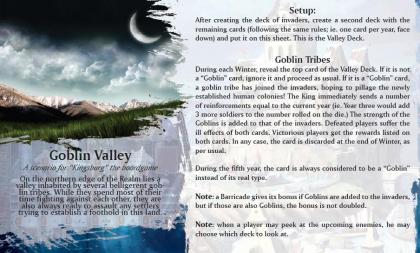 "On the northern edge of the Realm lies a valley inhabited by several belligerent goblin tribes. While they spend most of their time fighting against each other, they are also always ready to assault any settlers trying to establish a foothold in this land."

This official scenario for "Kingsburg" creates a second deck of Invaders called the Valley Deck. During each winter, if the top card of the Valley Deck turns out to be a Goblin card, it makes the Invader attack that much more powerful, and hurt even more.