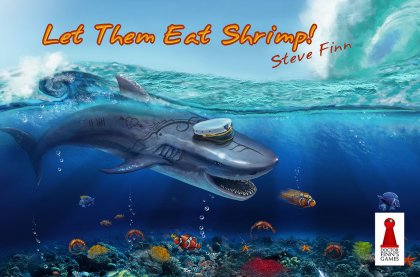 Swim, spawn, and eat shrimp while avoiding sharks! In Let Them Eat Shrimp!, players place fish tiles (in various geometric shapes) in an effort to spawn (by covering fish eggs on the board) and receive more fish tiles. The fish can also eat shrimp (to gain victory points) and must avoid sharks (which will eat your fish, fish eggs, and shrimp).&#10;&#10;Let Them Eat Shrimp! has two ways to play. The beginner's game is suitable for younger players, while the advanced version adds more strategy and depth, as well as more danger; in this version of the game, players might be knocked out early if they can't spawn quickly enough or if their eggs are devoured by the roaming sharks. The game also includes multiple game board components, which can be mixed and match for variety and various skill levels.&#10;&#10;