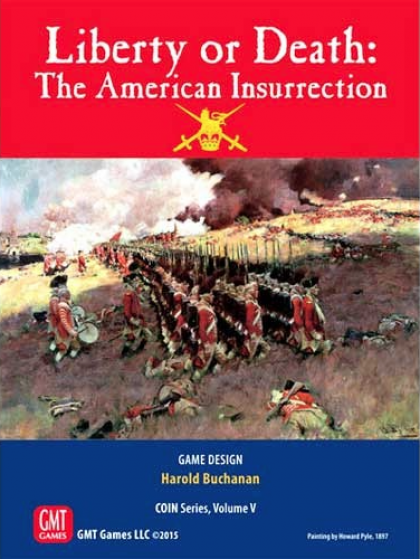 Liberty or Death: The American Insurrection

Volume V in GMT&rsquo;s COIN Series takes us back to the struggle of the American Patriots against their parent British government. A unique multi-faction treatment of the American Revolution, Liberty or Death: The American Insurrection will take 1 to 4 players between lines of clashing red and blue infantry, Indian raids, European politics, British control of the seas, French intervention, and the propaganda war.&#10;&#10;Building off the good works of COIN Series Creator Volko Ruhnke and Series Designers Jeff Grossman, Brian Train, Mark Herman, and Andrew Ruhnke Designer Harold Buchanan applies his knowledge of the American Revolutionary period to take a new look at the struggle that built a nation. COIN Series Developer Mike Bertucelli continues his work on this project and Volko Ruhnke is an active advisor.&#10;&#10;Liberty or Death: The American Insurrection features the same card-assisted counterinsurgency game system as GMT's Andean Abyss, Cuba Libre, A Distant Plain, Fire in the Lake and Gallic War with a set of twists that take the COIN Series to the 18th Century, including:&#10;&#10;&#10; Brilliant Strokes that trump initiative (Led by leaders like Washington, Rochambeau, Clinton and Joseph Brant) &#10; Irregular troops (Patriot Militia and Indian War Parties) &#10; Regular troops (British and French Regulars and Patriot Continentals) for battles and skirmishes with line infantry &#10; Rabble Rousing, Skirmishing, Tories, variable French entry, and Indian Raids&#10; Variable impact of naval commitments between the British and French &#10; French blockades to confound British plans&#10; French financing options to feed the Patriot&rsquo;s war effort&#10; A large deck of 110 + cards for great play variety &#10; Short, medium, and long-length scenarios with period-event or random options. &#10;&#10;&#10;Each faction in Liberty or Death brings new capabilities and challenges:&#10;&#10;As the British, you have to deal with an Insurrection across a massive region. With control of the seas (at least until the French arrive), you have extreme flexibility and can move across the coast and cities at will. You will muster Tories to support your efforts. They will march with you to battle, but they need your cover. You can control any space you choose, but you cannot answer every threat on the map. The Indians will work with you but, like the Tories, will need you to coordinate and protect them when the Patriots become aggressive. With the leadership of Gage, Howe, and then Clinton, you will be able to strike a potentially decisive Brilliant Stroke if the stars align. Each leader brings something new to the war effort. If you can strike the decisive blow and Win the Day you will be able to build Support and reduce Opposition in short order. If the option to Battle the French in the Colonies presents itself, it will be hard to pass up!&#10;&#10;As the Patriots, you initially aren&rsquo;t powerful enough to counteract the British Army. You will need to pick your battles and initially spread the Militia to key areas. Over time you can train a force of Continentals to take on the British Regulars. Until then, Rabble-rouse and work with the French to challenge British dominance. Skirmish with the British in small numbers to make their stay expensive. Will the French be there when you need them? Persuade the local population to give you resources to keep the heat up. Watch the Indians on the Frontier because if they develop their forces unanswered you won&rsquo;t be able to win the game regardless of what happens with the British.&#10;&#10;As the Indian player, you have selected the lesser of two evils in aligning with the British. You will work with them to lower Opposition using Raids but you will be developing your footprint by Gathering forces and building villages. The British can help you to protect them from the Patriots and in return you can assist the British in controlling the region. War Chief Joseph Brant and later War Chief Cornplanter give you the ability to mount a decisive attack with your War Parties but will it be worth exposing your villages to Patriot attack?&#10;&#10;As the French, you have the ability to be the thorn in the side of the British in North America. With the Hortalez Rodrigue et Cie Company, formed to feed the Patriots resources, you can fund the Insurrection. Your agents can rally assistance in and around Quebec and you can facilitate privateers to steal resources from the British. When you sign the Treaty of Alliance with the Patriots, you can bring French Regulars to America to March and Battle. You can also increase French Naval Intervention, Blockade Cities, move Regulars by sea and Skirmish with the British.&#10;&#10;As with earlier COIN Series volumes, players of Liberty or Death: The American Insurrection will face difficult strategic decisions with each card. The innovative game system smoothly integrates political, cultural, and economic affairs with military and other violent and non-violent Commands and capabilities. Rabble-rousing, Indian Raids, Persuasion, Naval Pressure, Letter of Marque, Looting, Trading, Skirmishing, and Foraging and more options are available. Flow charts are at hand to run any faction short a player&mdash;solitaire, 2-player, 3-player, or 4-player experiences are equally supported.&#10;&#10;COMPONENTS&#10; A 22&rdquo; x 34&rdquo; mounted game board.&#10; A deck of 110+ playing cards.&#10; 150+ red, green, tan, blue, and white wooden playing pieces, some embossed.&#10; 6 black and 6 white wooden pawns.&#10; 4 foldout Faction player aid sheets.&#10; 2 foldout Non-player Faction aid sheets.&#10; 2 Sequence sheets.&#10; A Random Spaces sheet.&#10; A sheet of markers.&#10; Rulebook.&#10; Playbook.&#10; 4 6-sided dice&#10;&#10;DESIGNER: Harold Buchanan&#10;SERIES DEVELOPER: Mike Bertucelli&#10;SOLITAIRE SYSTEM DEVELOPER: Orjan Ariander&#10;MAP ART: Terry Leeds&#10;COUNTER ART: Charles Kibler, Terry Leeds, and Mark Simonitch&#10;&#10;TIME SCALE: One year per Campaign between Winter Quarters&#10;MAP SCALE: Area movement&#10;NUMBER OF PLAYERS: 1 to 4&#10;&#10;(source: GMT website)&#10;&#10;

Voti e commenti per Liberty or Death: The American Insurrection