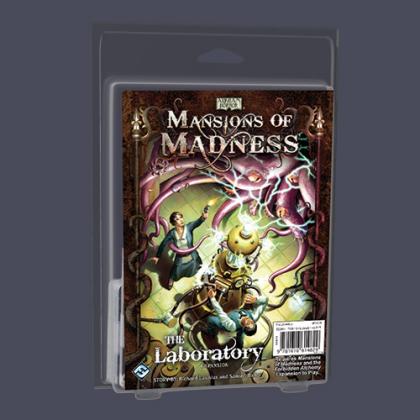 Mansions of Madness: The Laboratory

It has been two months now since your good friend Dr. Crawford Tillinghast berated you angrily, called you a fool, and ejected you from his home and laboratory in a fit of fanatical rage. His outburst came as a surprise to you, since he was not a man prone to anger, especially when the cause was your awed and frightened line of query about a strange machine he envisioned during the course of his metaphysical research. The doctor took your questions as criticism, and lashed out in response.

You have not spoken to the doctor since that day…

Inspired by the characters and themes of From Beyond, one of H.P. Lovecraft’s most terrifying short stories, The Laboratory challenges players to shut down Crawford Tillinghast’s strange machine before the mad genius manages to merge our world with another dimension and all its horrors. Of course, otherworldly terrors feature prominently in The Laboratory, as you’ll have to close portals to other realms during your exploration of Tillinghast’s mansion home. Can you survive the terrors you’ll encounter? Can you find the clues you need to deactivate Tillinghast’s arcane device?

Designed by Samuel Bailey and Richard Launius, the creator of Arkham Horror, The Laboratory is a fantastically free-form adventure, chock-full of the themes and mechanics that make Mansions of Madness a uniquely satisfying entry into the world of H.P. Lovecraft’s eerie mythos.

Voti e commenti per Mansions of Madness: The Laboratory