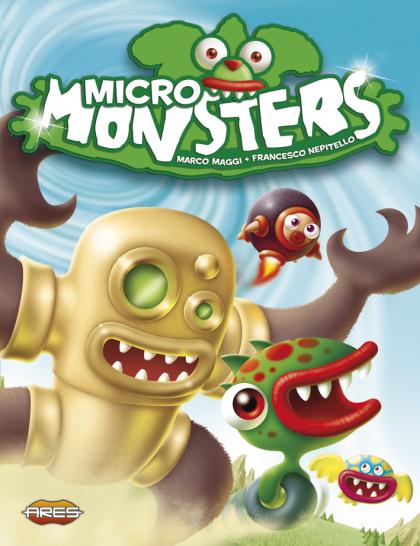 Four armies of alien micro-monstrosities clash in a challenge to the last jump!

In Micro Monsters, four races of horribly cute aliens – Autogators, Bigbears, Finbacks, and Turboturtles – face off, with each race wanting to close the rival monsters' dimensional gates. Using dexterity-based game play similar to that in MicroMutants and X-Bugs – and more commonly seen in Tiddly Winks – players in Micro Monsters "shoot" their monster tokens across the playing area by pressing on one edge of them with a "monster shooter" to send them flying. Land on an opponent, even with the tiniest bit of your monster, and you capture that opponent's token, removing it from play. Land on an opponent's gate, on the other hand, and you remove one of that opponent's energy tokens; take an opponent's final token and she must flip her gate to the damaged side. Land on a damaged gate, and that opponent is out of the game!

At the start of a player's turn, that player first rolls a die. If he rolls a monster, he takes his normal turn; if he rolls his race's special symbol, he uses his special alien power:

The last player to have an open gate – whether damaged or not – wins!