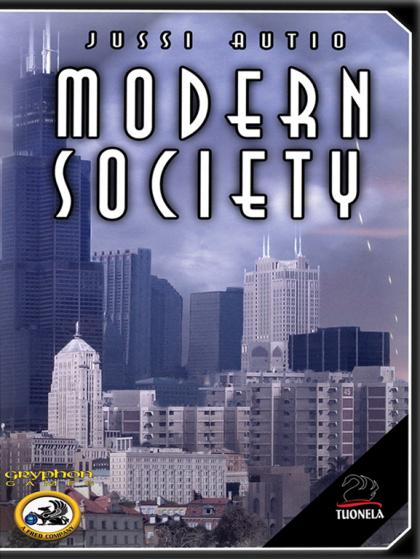 Modern Society is a game about our time, the world we live in. It covers aspects from Equality to Organic Food, from War in Iraq to Torture Scandal, to Youth Culture, Women's Priesthood and beyond. Those are but few aspects the players wrestle with as they try to convince the deep rows of the people behind their own agenda.

The players all live in the same society and seek influential power to leave their mark on the surrounding world. The people's opinions, what they feel and think, is determined by four societal values – militarism, economy, human values & green values.

The players have game cards which become ”hot topics” in the society once they are played. They will become the issues the imaginary townsfolk talk in coffee tables, what they read from the news and what shapes their view on the world. These issues then shape the four values, but also bring points through them. This means that the more militaristic the society is the more militaristic influence points you get from cards like 'Raise in Defence Budget' or 'War on Terrorism'. With these points you then push through laws that focus on that value. Only these law cards that the players have pushed through with their political influence they get victory points. And as each value has limited amount of laws there is a race who stands as the best advocate for each value.

Most cards have special abilities that makes them stronger with certain other cards (i.e. Feminism with Equality) or for example prevent certain points to be scored (i.e. Torture Scandal on militarism points or UN in Crisis on Human value points).

As the game proceeds the players try to sell their world view to the masses. But whether the well-being of the people is trampled as the players thirst for power and whether that society is still worth defending for? That is what the players decide all over again during each game they play the Modern Society.