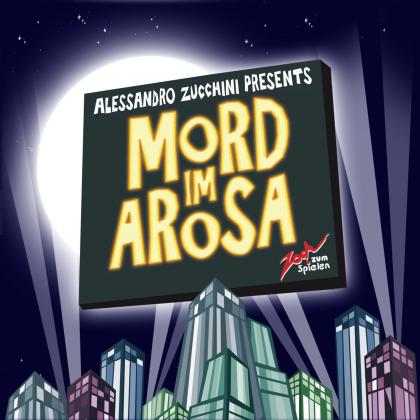 From the game rules:

A thriller in the MYSTERY TOWER for 2 to 6 good noses ears,10 years and up, by Alessandro Zucchini

Night in the "Arosa" hotel. Creaking floor boards, banging window shutters, strange noises. Behind the wafer-thin walls, no sound remains hidden from eavesdropping ears.
Suddenly: a bang! A scream! Hurried steps fade away …
Nobody saw anything! But everybody heard everybody else … There are clues from the hotel guests on all floors. But which of them will be discovered? And which of them will remain hidden? If you don’t want a murder rap pinned on you, you should lay the blame on the other players instead. Because one thing is for sure: the overwhelming evidence will convict the culprit.

The players arouse suspicion: they throw their clues (in the form of little wooden cubes) into the shaft of the hotel tower. If you prick up your ears, you‘ll be able to guess on which floors the suspicious clues come to rest. With this knowledge, you can denounce other players and cover your own tracks.
The culprit is the one who has left particularly suspicious clues in the vicinity of the scene of the crime. Whoever attracts the fewest suspicious facts, wins.