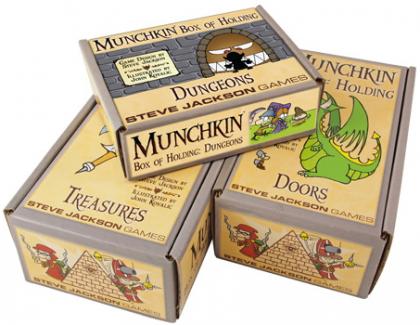 Munchkin Boxes of Holding are designed to hold cards from any of the many Munchkin games as those cards are a non-standard size. Each box can hold 500 cards, with one box for Door cards and one box for Treasure cards. Three themed versions of the Boxes of Holding exist – one based on basic Munchkin, another based on Munchkin Cthulhu, and a third based on Munchkin Zombies; each version is packaged with two unique cards for the corresponding Munchkin set.

Munchkin Boxes of Holding Set 2 changes this formula by including a third box large enough for all the Dungeon cards released as of mid-2013 and the Seals from Munchkin Apocalypse, with room to spare for other items still to come. This set also includes three new unique cards, one of which will be a Dungeon.