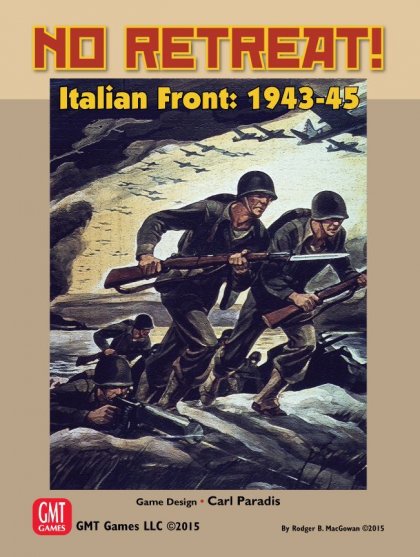 (from GMT website:)&#10;&#10;Following on the success of No Retreat! Where the Russian Front of World War II beckons, and then taking the action to the African Front, and then the French Front, game designer Carl Paradis presents the fourth chapter in this game series, No Retreat 4: Italian Front 1943-45.&#10;&#10;This game will be using a mix of all the previous No Retreat! game concepts/systems, including some from the solitaire module, to depict this long and gruelling campaign with the minimum of fuss and the fastest possible play time. Each turn will represent one or two months (depending on the weather), but not every Turn will see major action! So during Frontline lulls very little combat, if any, will take place but for frontline attrition, so these turns will pass in a speedy manner. When a side decide to go on the offensive then that specific turn will see a series of moves/combat/activations (like was done for NR2); using a variant of the regular No Retreat &ldquo;Target/Counterblow&rdquo; rules and markers. The important sea invasions will be shown in great detail, the German fortified positions also, and the long set-pieces battles (like Cassino or Anzio) will be represented correctly without bogging down game play. Like in NR3 &ldquo;Secret Campaign Plans&rdquo; will make an appearance, with players vying to attain special high command objectives, thus getting bonus victory points if the game does not end in an early &ldquo;Sudden Death&rdquo; and continues to the bitter end.&#10;&#10;To make the play surface more easy to use, the long Italian peninsula will be represented by a series of separate maps each showing a part of the battleground. As the frontline moves north or south, players will switch the &ldquo;play map&rdquo; map to show the actual areas of operations, thus saving a lot of table space. It will also be possible under certain circumstances for players to actually change sides in the game (keeping their accumulated Victory points): Thus both will be able to get the chance to be on the &ldquo;attacking side&rdquo; if wished for; historically the Germans were mostly on the defensive. The Event card system will also be changed a bit, with each card allowing multiple possible effects/events: all the cards will be useful, even when the main event cannot be used because of Strategic Initiative.&#10;&#10;Bonus Game&#10;But wait, there is more! For this deluxe edition, the Invasion of Sicily will be added as a separate mini-game. Very fast-playing, and will be an excellent learning or tournament game; that can be also linked to the main campaign game. Could the Axis have delayed the Allies longer on the island? And what if only a token holding attack was made, with the main landings a short while later on the mainland? Or Sicily completely bypassed altogether?&#10;&#10;Italian Front Scenario Listing&#10;&#10; Regular Game: The 1943/45 full campaign. Both players will choose a &ldquo;Campaign Plan&rdquo; that will instruct them as to their general objectives; there is a chance that one could also be imposed by the game system in case of failure! A players&rsquo; &ldquo;switch of sides&rdquo; could also occur because of the plans or player&rsquo;s will. The outcome of the Sicily mini-game can be linked to this scenario. Players can also change the Strength of the Armies and rate of reinforcements.&#10; Historical Game: The 1943/45 full campaign, but with the Plan choices limited to the more historically plausible alternatives. No switch of sides can occur. The Sicily mini-game is not used.&#10; Short Early game: The first part of the 1943/45 campaign. Only the Southern Italian maps will be used, and the game will end in Early 1944 (historically after the Anzio invasion petered out).&#10; Short Late game: The second part of the 1943/45 campaign. Only the Northern Italian maps will be used, and the game will Start where the previous &ldquo;Early game&rdquo; scenario stops, and continues until the end of the war in 1945.&#10; Sicily Game: This mini-game can be played &ldquo;stand alone&rdquo; or linked to the Regular Game Scenario. It also makes for an excellent fast-playing Tournament scenario.&#10;&#10;&#10;&#10;&#10;TIME SCALE: 1 month per turn&#10;MAP SCALE: 10 miles per hex&#10;UNIT SCALE: Divisions&#10;&#10;Components:&#10;&#10; One 17&quot;x22&quot; two-sided map&#10; Two 17&quot;x22&quot; one-sided maps&#10; 47 Event cards and 8 Leader cards&#10; One sheet of 88 round markers; 24 hex markers&#10; One sheet of 88 two-sided square unit counters&#10; Rulebook&#10; Scenario Book&#10; Player Aid Mat&#10; Two 6-sided dic&#10;&#10;&#10;&#10;&#10;DESIGNER: Carl Paradis&#10;DEVELOPER: Jack Stalica&#10;COUNTER ART: Mark Simonitch &amp; Charles Kibler&#10;MAP ART &amp; RULEBOOK LAYOUT: Charles Kibler&#10;&#10;