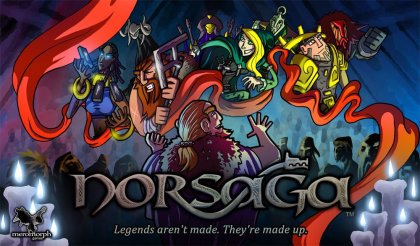 Norsaga is a 2-4 player puzzle battle card game in which players take the role of Viking poets who are vying to describe their personal saga and their heroic ancestry, while embellishing their story with tricks they've inherited. The first player whose family tree includes all of the heroic traits necessary for them to complete the saga they're describing wins the game.&#10;&#10;During set-up, each player is dealt a random saga card; these are placed face-up in the middle of the table. Six inheritance markers of the appropriate colors are placed upon the colored icons on the saga card. Each player draws a starting hand of four hero cards. Play proceeds clockwise. Each turn consists of the following phases:&#10;&#10;&#10; Catch Your Breath: Draw up to a hand of four cards. &#10; Embellish Your Story: Optionally use an embellishment for which you meet the qualifications, based on the color of your youngest hero (if one is in play).&#10; Continue the Tale: Play a card from your hand onto your family tree.&#10;&#10;&#10;Each family tree consists of seven spots and represents the player's heroic lineage. Each hero card possesses a dominant and (in most cases) recessive trait. Traits which match those required by the player's saga may have inheritance markers placed upon them. Once all the player's inheritance markers have been placed on their family tree, they win.&#10;&#10;The player's family tree also allows them to use embellishments matching the color of their youngest hero. If second or third generation heroes of the same color are present, more powerful embellishments may be used.&#10;&#10;