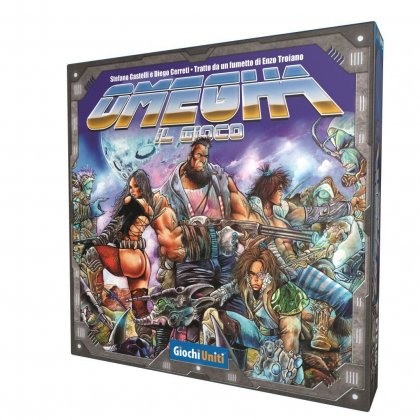 Description from the publisher:&#10;&#10;Omegha: il Gioco is a science fiction cooperative card-game for 1-4 players based on the Omegha comic book created by italian artist Enzo Troiano.&#10;&#10;The game is based on an original engine which allows to setup different adventures using the same deck of cards. Four different characters are available to the players, each with its own set of distinctive skills and abilities.&#10;&#10;Omegha: il Gioco can either be played in autonomous sessions - by selecting one of the available missions - or in a continous campaign based on an original story.&#10;&#10;Even though the game is based on a comic book it can be played by gamers who did not read the original story, as it is based on a completely new plot set in the same universe.&#10;&#10;The game cards and components are illustrated with Enzo Troiano's artwork.&#10;&#10;