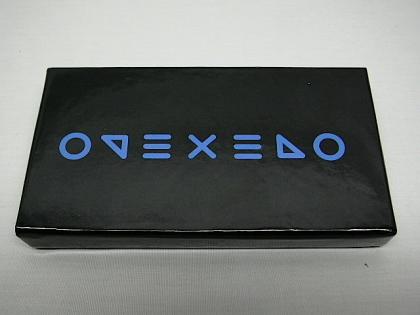 ONEXENO is pronounced as if you broke the word into ONE XENO: ONE as in the number 1; XENO as in the Greek philosopher Xeno who is responsible for Xeno's paradox.

ONEXENO is a deck of cards comprising all the combinations of pips around the edge of a 3×3 grid, which means they range in "value" from 0-8. There are rules for several games listed at the publisher's website.

Here are the summarized rules for the basic game, whose rules are included on cards in the box:
The goal is to accumulate the greatest number of points at the end of the game. Players gain points by forming rows of five matching cards. At the end of game, the points in a player's hand are deducted from the points that they have collected. When playing partners, the partner's scores are tallied together to form a total score. The player or team with the highest score wins.