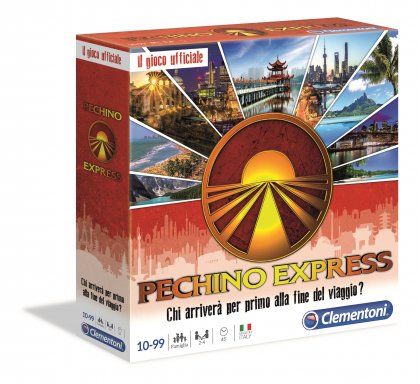 Based in the popular TV program, Pechino Express is a game in which the players have to travel all over the world to reach their destinations as quickly as possible: to do it they need to use the means of transport, collect food on the map, use bonuses at your disposal and answer to some questions about the visited places.&#10;&#10;During his turn, the player can take 2 means of transport (choosing between the face up cards or drawing them from the deck) or traveling to a nearby destination. To travel, you must play a number of cards equal to the number of small circles present along the link. Based on the played cards, the player will advance his disk on the timeline path. It takes less time to play cards with the same number or the same color. On each destination there is a food that is taken by the first player to reach it, so the players must also be quick in anticipating the opponents' moves. When a player reaches a goal destination, he has the right to take one extra food and, if he correctly answers a question, he earns a bonus card that he can play in subsequent rounds.&#10;&#10;When a player has visited all his destinations, the game ends: the players receive bonuses and malus in terms of time based on the reached destinations and the taken foods. Foods have different values depending on the type: rice will give a fixed time saving, the sandwich in a growing way, the fruit based on who has more, while the fish will give a penalty to those who have less.&#10;The player who has spent less time wins.&#10;&#10;-description from designer&#10;&#10;