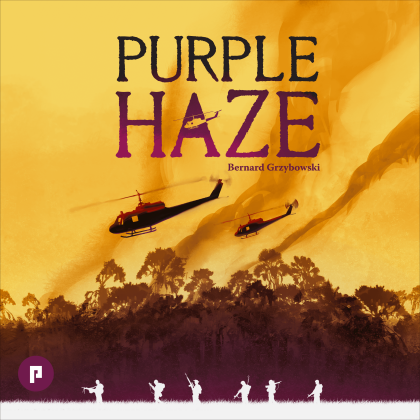 You look at the wrecked Huey, thankful you survived the crash. It got hit somewhere over the jungle. You lost the pilot. The gunner just fell out. Gone. On your way down you saw a glimpse of the other Huey. You think it got hit too, but you can't be sure. You look around at your squad &mdash; wild-eyed Marines fresh out of boot camp &mdash; and sigh heavily. You gotta move fast. VC will be coming...&#10;&#10;Purple Haze is an immersive story-creation campaign game for 1 to 4 players that drops you into the heart of darkness: Vietnam, 1967. You lead a squad of U.S. Marines through the dense jungles, flooded rice paddies, and straw-thatched villages of a war-torn country. Gut-wrenching choices will determine the fate of you and your mission, showing if you have what it takes to survive.&#10;&#10;It is in part a story-creation game, in part a tactical combat game, and in part a campaign game. Your decisions determine the story. Your tactics decide the outcome of life and death firefights. Your men will suffer. Some won't make it home. Those that do will get wiser, get tougher. The goal: Complete the mission, and get out alive.&#10;&#10;